In March we assessed electricity use in the house. This involved infinite detail which made Maureen’s head hurt (even before she wacked it and gave herself a mild concussion). Mark claimed to like this stuff, so he’s done the bulk of the assessment. Maureen suspects it made his head hurt, too.

Mark created a graph of the energy use of various devices. This is vaguely accurate, in a hand-wavy kind of way. It roughly fits what we’ve read elsewhere, that the biggest energy users are for heating and cooling. However, everything we’ve been able to directly test has come in at a different number than the estimates, so we know it’s not precise. About 6% of our power consumption is not accounted for. 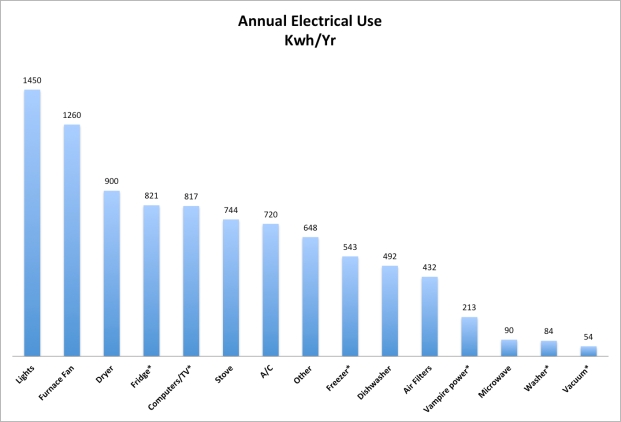 Appliances marked with asterisks were measured using a Belkin Conserve Insight Model F7C005 ($50 on Amazon). This meter shows the current going through it (watts), but can also do a running average of consumption. The items we could not measure (wrong kind of plug, or difficult in some other way) are based on website estimates, some using the age of the appliance, with Mark guessing at yearly hours of use. Other includes the breadmaker, toaster, radios, iron, mower, xmas lights. Vampire power is power used by devices when they are plugged in but turned off.

The first thing we discovered is to watch our assumptions. Over and over, what we expected is not what we found.

We’ll be switching to LED lights. We have mostly incandescent, as we hate the fluorescents we’ve tried, and were advised by several electricians to wait for LEDs. Now’s the time.

The furnace itself may be high efficiency, but the fan uses a lot of power. The insulating and sealing tasks that came up last month will help there.

A clothes dryer is a huge consumer of energy, and the best way to reduce that is not having a dryer. Hang up clothes outside. However, that sucks in the winter and is not recommended for people with pollen allergies (Maureen), because then you’re wearing pollen and sleeping with it. We bought a drying rack for indoors as a compromise. We couldn’t have done it with four people in the house or with kid laundry, and it’s tight in our back entry, but it’s working well for three adults. We were hoping for a 20% reduction in dryer use. In fact, it’s coming in closer to a third.

We suspect most of our appliances are not worth replacing right away. We plan to replace as needed, with more efficient models. We will look carefully at the freezer. It’s the oldest, and may be worth replacing now.

April will be all about examining each line on the chart, finding the best changes to make. Research research research. We’re delaying actual purchases in hopes the Alberta Government comes up with some financial support for carbon reduction by homeowners, so we can do more.